Hmm, yeah, I am having the worst rating ever in the Ranger in Ranked battles.

Why is that so? because I deal very little damage to ships, but I do take out most of the enemys planes. That is what 2-0-2 setup of the Ranger is for.

It labels me as a very bad player though!

Some say, but fighters fighting planes is an automated process. That is incorrect. Strafing is the key here.. If you do not manage to strafe the enemy planes, your ships are fucked. Strafing requires skills, especially with the bugs involved in strafing. I have discussed this HERE

Sad…bad :p Actually, both are fairly good, however wows-numbers.com ignore AA skills and state so as they think it requires no skills to shoot down enemy airplanes with airplanes… They are wrong!

Had I not wasted my efforts on shooting down airplanes, I might have been abit higher placed than #14 in the ranger sorted after max dam this season.. 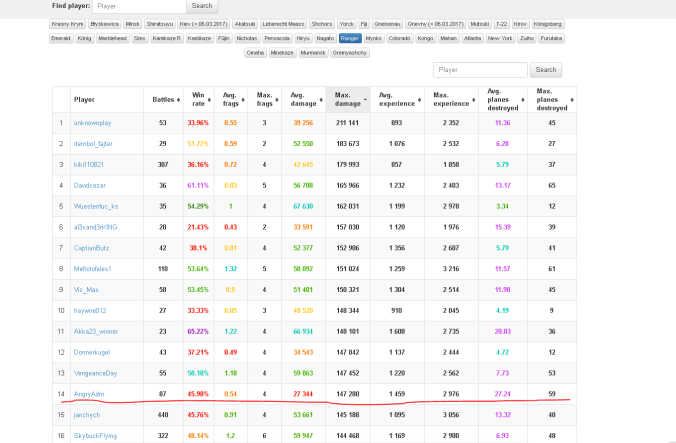 In comparison, I was #2 with the lexington last season where I wasted little time with fighters. The ranger though, cannot stand alone, if enemy decides to strike the ranger and I do not carry fighters, I am dead and the next thing that happens is that my teamsmates dies