I bought Train Sim World CSX heavy haul as it looked promising. It was early access and it had many bugs.

After a while DLC started coming out. However, the old bugs were not fixed.

The physics of the game is utterly broken. The reason for this, as stated by DTG is, that the FPS drops considerably with real world physics. DTG instead thought it was cool to let you accelerate a train to 100 mph and give it the ability to coast, even up hill under no power for 40 miles.

Now we have the original bugged out CSX heavy haul and 3-4 DLC’s priced at around 100 USD combined and 29 USD for CSX heavy haul. So, all in all 130 USD for bugged out software that probably will never be fixed.

Why do I assume that it will never be fixed? Well, it seems to be the way DTG deals with their customers. They don’t fix them, rather they milk the cow for each penny and then drop support. On steam this is very visible from the comments of other users. 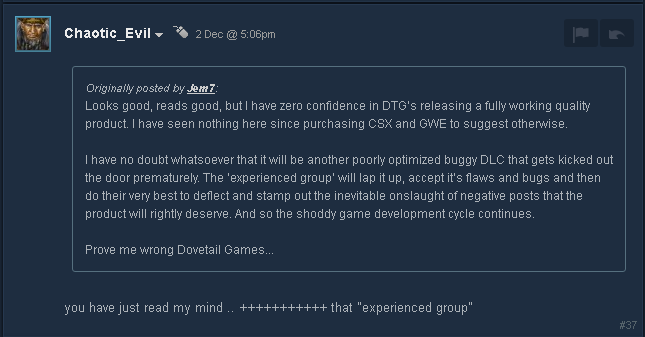 My advice: Stay clear of ANY and ALL DTG games! They do not have a sense of responsibility towards their customers. Essentially that makes them a greedy distrustful company. Let us collectively force them to change their ways or shut them down. I know that is my mission now! So, the stocks shall drop like a rock!